Most of us are familiar with the Bible’s chronicle of the epic battle between David and Goliath. Malcolm Gladwell puts this title story to good use in his New York Times best-selling book David and Goliath, Underdogs, Misfits and the Art of Battling Giants. In example after example, he illustrates how disadvantages in life can strengthen us and oddly become advantages in the long run. He touches on stories like David and Goliath showing how an underdog often uses unexpected and unpredictable techniques and skills to overcome difficulties and launch themselves into unique greatness.

Gladwell masterfully lines up a hall of “giant underdogs” as he details stories of a doctor, a teacher, artists, a dyslexic, and many more. 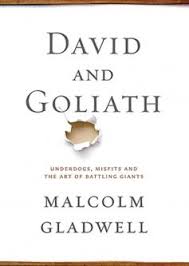 For example, he said that “conventional wisdom holds that a disadvantage is something that ought to be avoided – that it is a setback or a difficulty that leaves you worse off than you would be otherwise.” He continues, “but that is not always the case…..I want to explore the idea that there are such things as desirable difficulties.”

He notes that people with difficulties are forced to be creative and innovative. There are more opportunities to think outside the box than what a more average, normal life might bring.

I enjoyed this book immensely and 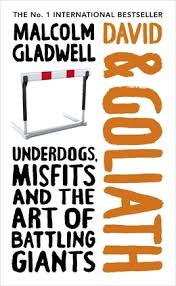 fundamentally agree with the foundation of his thought process and research. If a disadvantaged person has the motivation and ability to push for resources to implement overcoming strategies with new, creative and innovative ideas – success skyrockets. For some, I believe a disadvantage is simply a disadvantage. Some do not and/or cannot capitalize on their disadvantages.

That question is not addressed in the book or in this research that is quoted. However, it does not take away from the delightful journey as Gladwell describes example after example of people who took their difficulty and turned it into something great.

On a small scale, I can relate to this book personally as I know my own experience facing physical disability changed me for the better in many ways and affords me unique opportunities I would not encounter otherwise.  The book reminded me to honor the blessing of the unique gift that dichotomously exists in my limitations.

Incidentally, I have read other Gladwell New York Times bestsellers (The Tipping Point, Blink) and did not notice the Judeo-Christian influence evident in David and Goliath.  Apparently, Gladwell returned to his Christian faith while writing David and Goliath.

Noteworthy Quotes from David and Goliath by Malcolm Gladwell

There’s no possibility of being pessimistic when people are dependent on you for their only optimism.

Courage is not something that you already have that makes you brave when the tough times start. Courage is what you earn when you’ve been through the tough times and you discover they aren’t so tough after all.

The right question is whether we as a society need people who have emerged from some kind of trauma— and the answer is that we plainly do. This is not a pleasant fact to contemplate. For every remote miss who becomes stronger, there are countless near misses who are crushed by what they have been through.

Unexpected freedom comes from having nothing to lose.

When people in authority want the rest of us to behave, it matters— first and foremost— how they behave. This is called the “principle of legitimacy,” and legitimacy is based on three things. First of all, the people who are asked to obey authority have to feel like they have a voice— that if they speak up, they will be heard. Second, the law has to be predictable. There has to be a reasonable expectation that the rules tomorrow are going to be roughly the same as the rules today. And third, the authority has to be fair. It can’t treat one group differently from another.

The powerful are not as powerful as they seem— nor the weak as weak.

Did you read the book?  If so, what did you think about it?  If not, I hope you pick up a copy. -Madge

For several years I have relied on SmartWool’s Merino Wool layers to provide winter warmth.  I am not an avid winter sports girl, in fact, I can barely stand being outside for an hour in the dead of winter.  I am paralyzed due to a spinal cord injury.  One of the side effects of my injury is that I get cold easily.  In fact, I can be cold even when my body is truly warm.  I know it sounds like an oxymoron but you just have to live the life of someone with a high level spinal cord injury to understand.  Starting in October I count the months until April and cherish each warm day.  In September, I brace myself for the blowing of cold winds and prepare for the winter chill – even in my moderate southeastern U.S. climate. 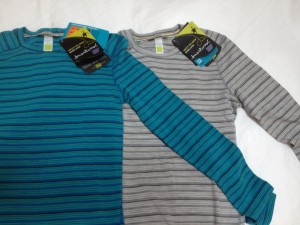 I’ve searched high and low for every kind of heater, warm weather gear and warmth gimmick, and I seriously don’t care much about the electric bills in the winter.  I’d rather sacrifice other things to keep warm.  Once the air dries out and the temperatures drop there is nearly a constant background noise in my head whispering, ” I’m cold”.  It can be a rather annoying.

I discovered my favorite find for cool weather clothing a few years ago when I read an article about how wool keeps you warmer than synthetics and why wool is such a great fabric. 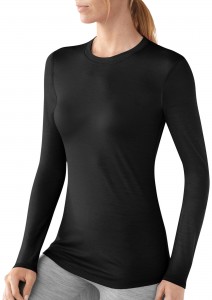 People say it’s itchy, but they haven’t experienced fine merino wool made by companies like SmartWool, Icebreaker and Ibex.

I wear wool all year.  In the heat of the summer I have a couple lightweight wool tee shirts that I use as the perfect shirt.  It keeps me comfortable in the air conditioner and cool outside in the heat.

The Pros and Cons of high quality merino wool

If you are not convinced to make an investment in high quality merino wool clothing, treat yourself to a pair of SmartWool socks, then decide on your next piece.

Stay warm and share your tips for beating the cold below.

Recently we purchased several gluten free mixes online from Williams-Sonoma. We don’t eat a lot of cupcakes around here, so it is a treat when we have fresh GF baked goods! 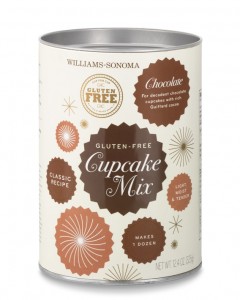 Cost
Let me start by saying that these mixes are pricey – $12 for a mix that makes 12 cupcakes. Even the mixes that are not gluten-free at Williams-Sonoma are pricey – but they are still more reasonable than buying them from the bakery!

Taste
I was expecting a very chocolatey cupcake! The flavor reminded me of a red velvet cake with a hint of chocolate and in my opinion, did not have a deep chocolate punch.

Texture
Wow! The texture was absolutely perfect! You would not be able to distinguish it from its ‘non’ gluten-free counterpart if you didn’t know any better. Texture is where the mix shined! Texture is so important in a cake. If it’s too heavy or mealy or dense it just is not worth eating. The cupcake held together nicely and was not too crumbly or tough. 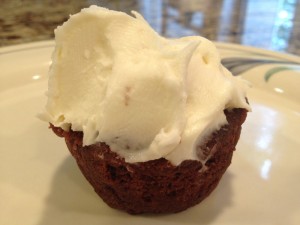 Our Frosting
We already had some cream cheese frosting in the refrigerator, so we paired the cupcake with it. Maybe that’s what contributed to it tasting like a red velvet cake. I suspect that the butter-cream frosting suggested on the package would be a better choice to pair with this chocolate cupcake.

Note – we did not frost the cupcakes until we were ready to eat them. Also, we only made half of the mix by splitting the ingredients. I often split a mix to accommodate our small family with a fresh treat so not to be tempted to eat four cupcakes in a day or two. We could freeze them, but I prefer freshly baked.

Wrap up – if we make the cupcakes with Cup4Cup flour from scratch, the process would be only slightly more difficult and would likely yield a similar, and potentially more flavorful cupcake.

These cupcakes are a special treat and probably not your every day choice because of their price…but let a little sweetness for the taste buds remind us to use healthy, sweet words…

Pleasant words are a honeycomb:
sweet to the taste and health to the body. Proverbs 16:24 (HCSB)

I scream, You scream we all scream for…Gelato? What?

Talenti, the best selling gelato in the US is moving its production headquarters only fifteen minutes from my house.  The day before I read the announcement of the move I wrote this review because of my enjoyment of this mouth-watering and delicious product. Now I am ready to tour the plant!

Truly Spectacular
I’m not a fanatical fan of ice cream and eat it only occasionally. When I do indulge I prefer the high end, high fat  brands like Haagen Das and other great rich and creamy delights on the market.  I’d rather have a couple spoonfuls of the good stuff than a bowl of so-so ice cream. 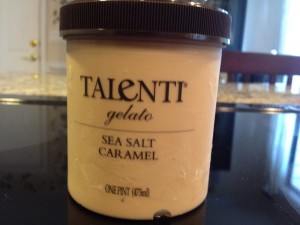 Recently, on a whim, we picked up a pint of Talenti’s Sea Salt Caramel Gelato from one of the last places I would expect to find such an incredible artisnal indulgence – Target.  The treat is also available at most retail grocers.

Its smooth creaminess outperforms ice cream any day of the week, and its caramel flavor pops an outrageous silky experience for the tongue. All the ingredients used are of exemplary quality.  ‘Dulce de leche’ deep caramel from Argentina,  chocolate from Belgium, fresh hormone free milk, fleur de sel sea salt from France and cane sugar. 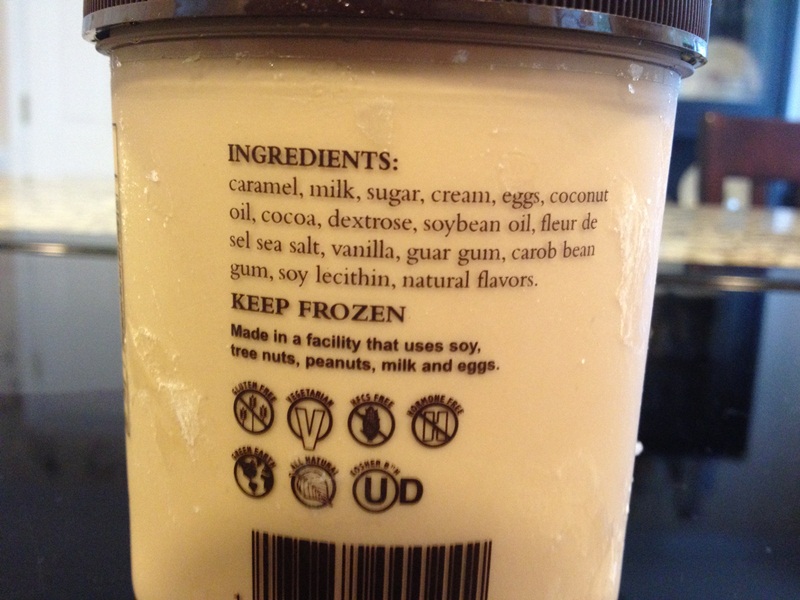 What is Gelato?
In case you don’t know, gelato is similar to ice cream but because less air is whipped in it has a magical texture. It typically has more than 30% less fat than high end ice creams, but because of Its reduced air content it is not prone to ice crystal formation often battled in ice cream.

There is a greater proportion of whole milk to cream and it is churned at slower speeds than ice cream yielding a product that is super silky and lower in fat.

Often this treat is served at a slightly higher temperature than ice cream. Interestingly, my husband accidentally put the gelato in the refrigerator instead of the freezer overnight and the next day when I wanted ‘a bite’ I grabbed a spoon and was surprised at how it held it’s texture upon refreeze…and it was dangerously decadent in its refrigerated state too – I almost ate the remainder of the container.  Oh no, my occasional indulgence is turning into a daily routine.

Other Flavors
We tried the Double Dark Chocolate, and it was rich and tasty, but I didn’t prefer the incorporation of tiny dark chocolate flecks that disguised its smooth texture. Chocolate chip ice cream has never been my favorite, but the small chocolate caramel truffles in the Salted Caramel are delectable. I savor each one individually!

There has to be a flavor for everyone.  I’ve got my eye on the smooth chip free Belgium Milk Chocolate and the Chocolate Peanut Butter Cup as well as a few sorbetto flavors. 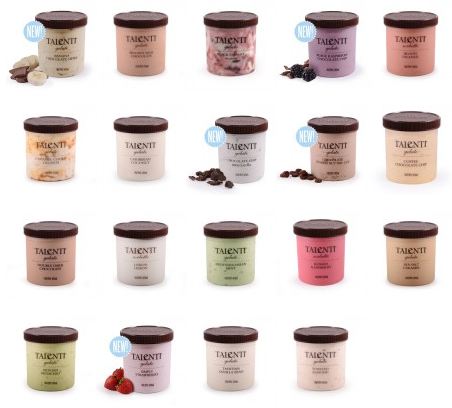 Perhaps the next time you crave a sensational treat, you will reach for one of Talenti’s delightful treasures. Enjoying the Sea Salt Caramel flavor is better than savoring a high quality salted caramel. If you like caramel I have no doubt it will not disappoint.

May all sweetness be added to your day, and for heaven’s sake try some Talenti’s Sea Salt Caramel Gelato, but be wise my friends or you might just get hooked.  -Madge

Gracious words are a honeycomb, sweet to the soul and healing to the bones.
Proverbs 16:24 NIV