It was September 1999 after Brent and I had dated for 2 1/2 years when, in typical female style, I wanted commitment. Although I was crazy about him, my peace with our relationship was waning. Brent was understandably cautious about taking the ‘marriage’ plunge with 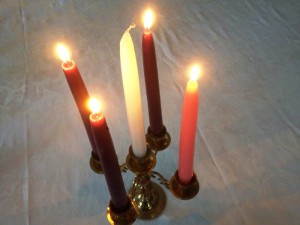 anyone, much less a gal with my disability…yet I needed to get commitment or back off and regroup. That was when, after much prayer and agony, I talked to Brent about a ‘break’. It was a difficult but healthy time for both of us. When Brent called me a week after our ‘break’ started to ask me out it was almost impossible to say no, but God gave me the strength to do it. Test – passed!

Even though this ‘break’ was rife with sadness, I had peace. No matter what happened I knew we would both be fine – whether together or not.  My heart dealt with grieving the potential loss of Brent as well as the loss of my mom four months earlier.  It was my relationship with God and love for wisdom that gave me the strength to make a tough choice. I knew that peace within is not a mere absence of grief or difficulty, but an active experience of following God that promotes peace regardless of circumstances.

As we light the advent candles we remember that Christ’s birth set the stage to bring us life with hope, love, joy and peace. He is ever present in our times of grief and difficulty. I can’t help but pause to think of those who struggle to celebrate this season because they grieve.

The focus of peace reminds me to find gratitude and celebrate by making choices – wise choices – that may be tough but bear good fruit. Peace is present when we choose to thank, choose to let go of fear, and choose to trust the One and Only – especially in our grief and heartache – and even if it means a girl might never get married or never walk again!

Let the peace of Christ rule in your hearts…. And be thankful. Colossians 3:15

Obviously, the story of our relationship ended in marraige…we took our healthy ‘break’ and after a couple months began to see each other again. To my complete surprise within two months Brent proposed! I think I said something like ‘Huh? Are you sure you want to get married?’ Oh yeah, then I said ‘Yes!’.

As we approach Christmas  ‘may the God of hope fill you with all joy and peace as you trust in Him, so that you may overflow with hope by the power of the Holy Spirit.’ Romans 15:13 NIV

Would love to hear about your difficult, yet ‘peace-full’ circumstances…

One of the sweetest notes I ever received came from my cousin, Buddy, shortly after my Brent and I were married in 2000.  About this time in 2010 he and his wife were beginning a battle with breast cancer.  It was not supposed to be too aggressive, but, sadly, she died in late January 2011. He’s a bit older than I am so we didn’t pal around much as kids, but his wedding was the first I vividly remember.  I remember how happy they were on that bright and sunny day! They began deeply in love and as she parted they were even more deeply in love along with a legacy of amazing grace.  Today, I’m thankful for cousin Buddy and his inspiring partnership with the love of his life….I appreciate the love of my life more because of him.  In honor of cousins Buddy and Mary, I present, ‘Madge and Brent Get Married’  written by cousin Buddy on our wedding day 12 years ago. 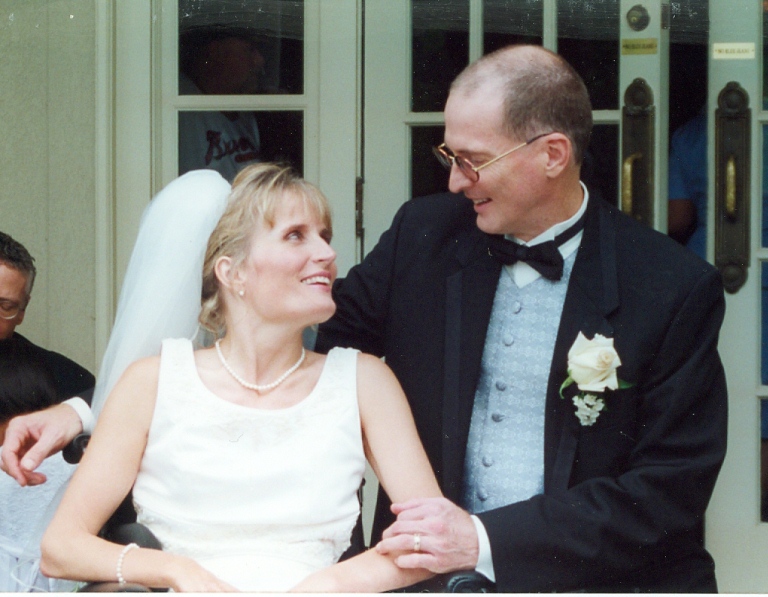 It’s a September Saturday morning, and we are on our way to attend the 11:00 AM wedding of Cousin Madge to her fiance, Brent.  Well OK, technically she is my second cousin.  You see her dad and my dad, were first cousins given that their mamas, Vera and Anita were sisters. Got it?  It’s getting to the point that you can’t tell a cousin relationship without a diagram!

We dropped by to pickup Mom and Dad because there was no way they were going to miss this special event in the life of a very special lady!  Now Dad could say that with conviction since the UGA-USC kickoff wasn’t until 3:30 PM that afternoon.  After all,  weddings are special, but this one was just a little bit special-er!

If you know Madge you know that adversity has been a more frequent visitor than any of us would ever like to see.   At the age of five, her mother died from complications of surgery.  While in college, she was involved in a car accident that left her a quadriplegic.  And in recent years she lost her dad to a heart attack and her step mom to cancer.   Yet I have never seen Madge without a smile or without that contagious positive outlook on life. (OK, so she didn’t see me that often!) So today is her wedding day!  Yep, it’s gonna be a special day.

The church building didn’t really look like a church, but it wasn’t long before you realized that God was present in that place.  As we walked in we saw Madge’s four older brothers and listened as a trio of singers set the mood with a series of contemporary gospel worship songs that once again told you, today was a special day.

The procession began with the Twila Paris song “He is Exalted” and as the minister and the groom waited, Madge came down the aisle in her wheelchair followed closely by her four brothers who ‘gave her away’. By the time she and her brothers got to the altar, there was not a dry eye in the church.  And yes, I will admit a tear as well, OK, OK, the plural form would be more accurate.  I never do have a Kleenex when I really need one. 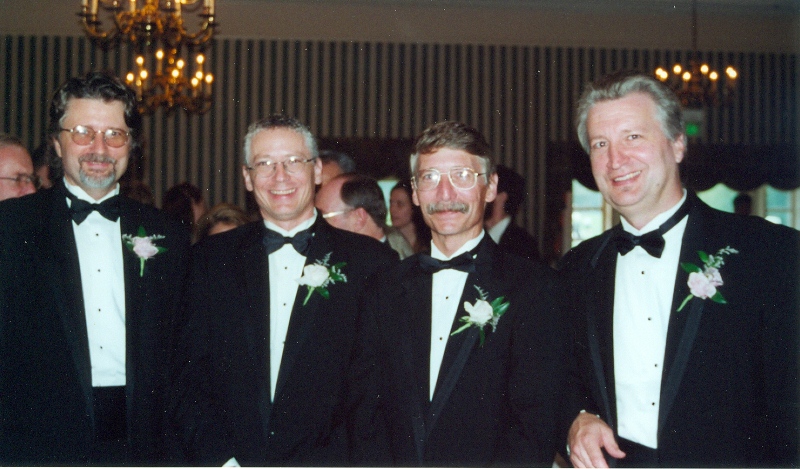 During the ceremony, the couple requested we all stand and sing the Darlene Zschech song, “Shout to the Lord”.   By then I was ready for the Second Coming!   Yet the most touching moment came as the pastor related his personal comments before the vows were exchanged.  It seems he has known Madge for 23 years and Brent for over 6 years.   He shared how Madge had come to faith in Christ and how following her accident had overwhelmed them all with her never-look-back, only-look-forward attitude.  He praised her family as one who rallied around her like none he has ever seen.   Finally, he praised God for her Christ like spirit as reflected in her manner and service to the church.   Brent, he shared, was a true gentleman possessing a spirit of tenderness.  However, Brent had built up over the years such a wall in his heart that he refused to allow relationships to get very close.   That is, until he met Madge.   And brick by brick, Madge was able to tear down the wall and today they were ready to commit to a life together.

Following the exchange of vows the couple left to the tune of “Great is the Lord”.   We joined them at a nearby country club for the reception.  It was good to see the family.  Her brothers live New York, New Jersey, Virginia and Ohio.   Madge and Brent will be setting up residence at her current home.  I recall that Madge works for a software company and Brent teaches at a University nearby.

These days, gatherings of our extended family seem to center on weddings and funerals.   The former preferred over the latter.  Weddings have always seemed to be such a sacred moment for the wedding couple with the presence of family being a sign of love and support.  But today, I came away as the one who was blessed; it was a sacred time for all present.  Thanks Madge and Brent. Your wedding was a reminder that God is sovereign.  The verse on the wedding program said it all, “Love always protects, always trusts, always hopes, always perseveres. Love never fails”.  1 Corinthians 13:7-8 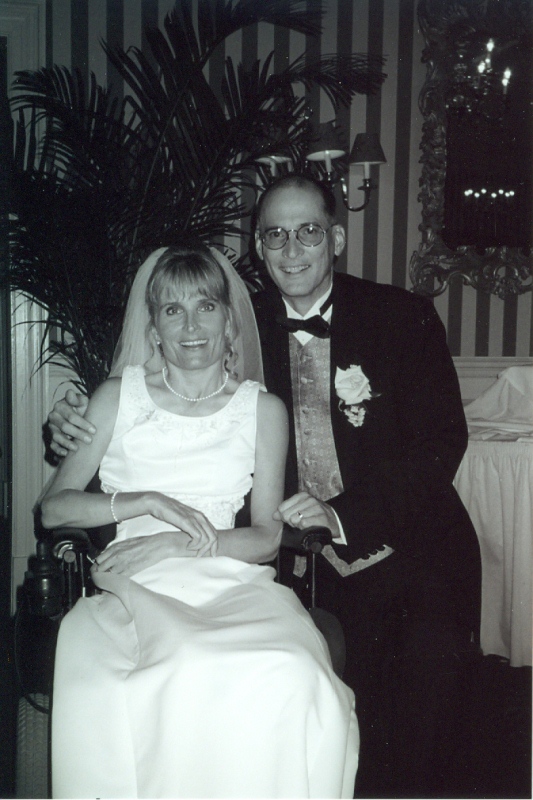