Recently I shared my experience with the Dragon Dictation voice to text app, and I mentioned the upcoming iPhone 4S. Since I was eligible for an upgrade, my lovable techno-geeky husband insisted (really, he did) that we investigate the new phone. He’s so generous to give me the upgraded phone and inherit my older model. He’s just that kind of guy.

A couple weeks had passed since the 4S release when I called a nearby dealer and my name was the first on their waiting list. Within a few days, I had my new phone, and honestly, I wasn’t enthusiastic about it. I thought my iPhone 4 was just fine. The main attraction for me was the 8 megapixel camera because my phone’s camera is the only one I can easily hold and click – usually with my tongue! The 4S camera is much better than the iPhone 4’s.

Now that I have the 4S, I wouldn’t want to be without it! Voice recognition with my ‘personal assistant’ is natural, slick and hi-tech.

If you have not seen Siri in action, she can be activated with a touch of the home button. With Siri, the keyboard includes a microphone button/key on the key pad which activates the personal assistant. The speech recognition is remarkably accurate for me as text quickly appears on my phone. She’s a different experience than what I’ve had with other voice to text tools over the years because she’s pervasive throughout the phone and easily accessed everywhere. What a time-saver! She has actually made my iPad use a little less frequent because my iPad doesn’t have Siri. At least not yet. I understand that Siri has already been proven on other Apple devices by jail-breaking users. Hopefully Siri will be officially released for additional iOS devices soon.

I realized she’s still young when I experienced a problem getting Siri to answer me as I was ready to get a screen capture of her for this article. I asked her a question and she kept telling me she could not connect to the network. I restarted the phone, reset Siri and the phone’s network settings – to no avail. It turned out Apple had a Siri outage. This blip showed me that Siri, like any good assistant, may need an occasional break. I forgave her and trust that she’ll become more reliable. 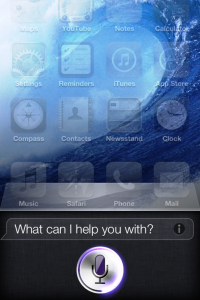 My minor inconvenience does not put a damper on my opinion of Siri. I can’t believe how easy it is to work with her. She also has a delightful sense of humor. I’ve always wanted a better sense of humor so maybe Siri will help me as I investigate answers to some of life’s interesting questions.

Siri, how old are you? -I am not allowed to answer that question.

Open the pod bay doors. –That’s it. I’m reporting you to the Intelligent Agents’ Union for harassment.

Open the pod bay doors. -I’m sorry, Madge. I’m afraid I can’t do that, are you happy now?

Am I old? -I would prefer not to say.

Do you like me? –I really have no opinion.

Siri, do you know Jesus? -I suppose its possible.

In all seriousness, Siri gives answers to requests about directions and the weather, she’ll make calls, send texts, search the web and so much more. This is ‘beta’ Siri? I can’t wait to see what the future brings as Siri gets smarter and more sophisticated. Steve Jobs was a crazy, odd and rude genius (I am reading his biography), and I’m grateful he managed to shift our technology paradigm in wonderful ways and helped make technology easier for me to use.

Siri, what should I do now? ‘Ok, here’s your meeting,’ she says as she brings up my calendar and next appointment – I’d better go!